Thrashing around for a sketch 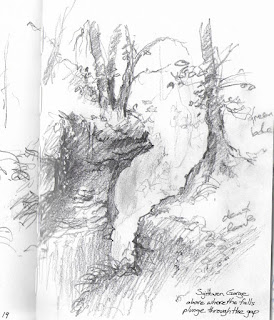 The recent Patchings Art Festival in Nottinghamshire was something of a whirlwind for us, with almost non-stop activity on our stand, and interest in my new book, Seas & Shorelines was astonishing. The book sold out and that was not including the other books. Having meetings with a number of people, I really didn't manage to see even half the show this year, and had to miss out meeting many artists, but as usual it was a fabulous show, easily the best in the UK. It was a delight to meet so many students even though I was torn away so often by sheer numbers. I did three demonstrations in the St Cuthberts Mill marquee on their superb Waterford and Bockingford papers, and had the privilege of being accompanied on stage by some local wildlife: at the rear of the marquee a nest of bees became interested in the demonstrations. Having these massive bees circling round your head as you paint away does tend to inject a real buzz to your work!

Getting back home was no picnic. The next day my two-year-old grand-daughter arrived and more or less took over the place, causing delightful mayhem and scattering my toys all over the place. About a week after returning from Patchings things returned almost to normal and I decided to go for a hike in a local gorge. Unfortunately it was massively overgrown with vegetation and I'd forgotten my boots and stick. It took some time to break through to the lip of the gorge, but once there I managed a couple of pencil sketches, one of which appears above. I had to leave out most of the background tree detail.

I continued upstream, high above the rocky course of the stream along a slippery, eroded pathway, but by now armed with a sturdy pole I'd found lying on the ground. Under some cliffs and round the corner I descended into the undergrowth from hell. Nobody had been this way for years probably. I was confronted by a dense area of briars, nettles, branches and other vegetation, all covering many fallen tree-trunks. I didn't want to return the way I'd come so I literally thrashed my way through the undergrowth, mounting each tree-trunk and attacking the undergrowth beyond before leaping down the far side. This took ages and in the heat the perspiration was running off me. At the far end - some 70 yards or so - I looked back and realised it would have been better to have jumped into the river and waded up, thus avoiding the undergrowth.

There was much more to the day, but I shall pause there. I returned home happy with a brace of sketches and having had plenty of exercise. Just being in such a marvellous spot and enjoying the natural environment is something really special. Even for a few scratches!

Signed copies of Seas & Shorelines are available from my website

Email ThisBlogThis!Share to TwitterShare to FacebookShare to Pinterest
Labels: Patchings Art Festival, pencil sketching by the masochistic method, sketching in a wild gorge