I've been somewhat distracted over the last week or so, with members of the family sick, hence the lack of posts. We're experiencing marvellous walking and sketching weather in Wales at the moment, and it's a lovely time of year for getting out with your sketchbook, flask and sandwiches. Being out amidst nature is one of the most therapeutic ways of casting off the stresses of life.

In a recent comment Mark has enquired about the manner in which 19th-century artists preserved the whites in their watercolours. They did not have any masking fluid available in those days, but they did employ a number of the alternatives that we currently use, although I don't know many artists these days that rub out areas of watercolour with stale bread, which was a method much used by JMW Turner. 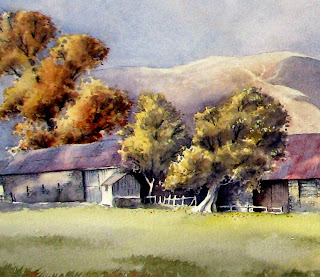 The most obvious alternative is that of negative painting, ie, painting the dark spaces around a light object as in the tree-trunks and fence in this watercolour detail. With practice this is an extremely useful technique. You will see that some blue-grey shadows have been painted over the light trunks directly under the foliage where it casts a shadow, yet the trunk still stands out, though less stark. John Cotman, in the early 19th Century exhibited marvellous control of this method, and is a water-colour master well worth studying.

Well before the 19th Century artists used white bodycolour to create highlights, or to render small features such as seagulls, and Turner certainly used it in many of his works. Writers of that period would often refer to this as 'chalk', so that the medium used might be referred to as 'watercolour heightened with chalk'. Turner used numerous techniques to achieve whites, scratching through the darks with a knife, thumbnail or the wrong end of a brush; removing colour with blotting paper; and even stopping out areas with glue size to prevent washes being laid there. The glue size was washed off afterwards, but this technique obviously required great care and expertise, as it would be easy to mess things up at the washing-off stage, but expertise was something which Turner, of course, was not short of!
Posted by David Bellamy at 20:09 3 comments:

Email ThisBlogThis!Share to TwitterShare to FacebookShare to Pinterest
Labels: Reserving whites in a watercolor; 19th-century methods of reserving whites; alternatives to masking fluid

Adding another colour to a monochrome painting

I've not been at home much lately, which makes it difficult to maintain a regular blog, and this week we're running a painting course in Mid Wales. The beautiful sunshine on the last two days made excellent light for sketching outdoors, although it has been a little on the cold side. The weather forecast told us that it was going to be quite different from this, which makes us rather sceptical about their forecasts of doom for our planet. 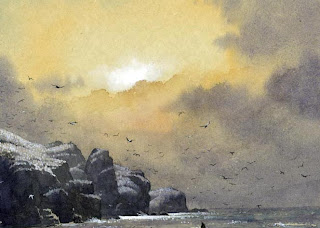 Now and then I rather like to put a little 'doom' into a painting, often a sense of impending horribleness as in this watercolour of Grassholm Island off the Pembrokeshire coast. Its northern cliffs are mainly black and dire, with the great contrast of white gannets and gannet guano in spring, so to achieve a dramatic effect I have painted it mainly as a monchrome using indigo, but injecting some colour in the form of cadmium orange in the sky. Because I've painted this on a biscuit-coloured tinted paper I had to add the highlights with white gouache. There are many gannets in the sky and on the crags.

As I've mentioned before, carrying out a monochrome is an excellent way of learning to apply watercolour without the problem of colour mixing, but when you add a further colour like this it will take you one stage further and possibly increase the drama. Dark, moody paintings like this can convey a striking sense of mystery, so don't be afraid to apply some really strong darks in your watercolours.