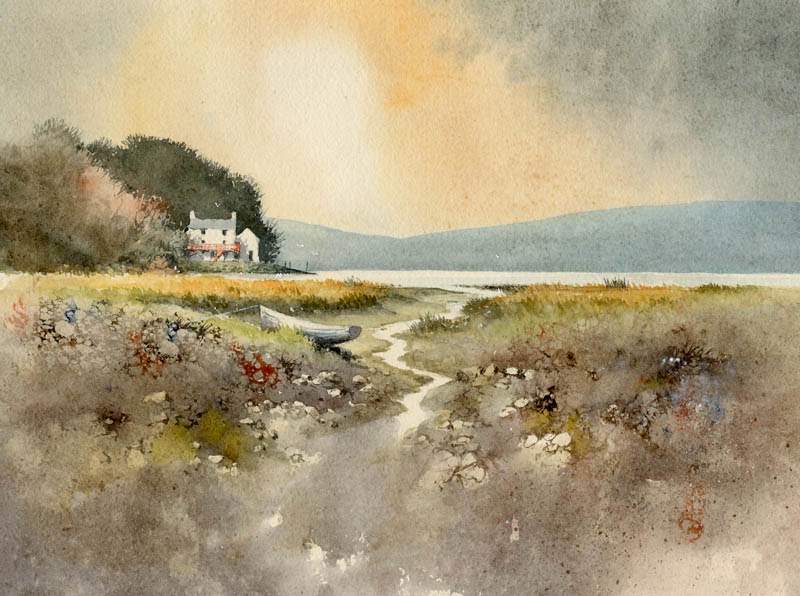 It's some time since I found time to write a blog post - having to work on the studio, being away from home and a recalcitrant computer with an impossible broadband service has made it difficult. The sun is beating down outside and the spring flowers are rife, a marvellous time to be out sketching, so maybe when I finish this post I'll get some fresh air.

My subject today is Dylan Thomas's Boathouse  where he wrote his poetry. In this case I have designed the composition so that the foreground plays a major part, covering at least half the area of the painting. This has allowed me a rather long lead-in where I've elongated one of the ditch-like creeks and let it fade into the immediate foreground. With so much foreground space there is a danger that it could be severely over-worked, so I have made the detail intermittent, gradually losing it lower down as a vignette.

I began rendering the foreground by drawing in the shapes of stones in outline with a fine rigger brush, varying the colour with burnt umber, light red and ultramarine. I then washed a medium tone of French ultramarine and light red over the area, avoiding the stream and light stones, working very quickly with a number ten sable, not worrying if I covered some of the stone images, and losing the edges of others where they were still wet. While this was all wet I dropped in other colours, mainly yellow ochre, and then let the painting dry. Finally I drew in further stones with the rigger - these are the ones that stand out more prominently. I also added touches to some of the light stone shapes to make them stand out.

This painting is now on display with others at Art Matters in their White Lion Street Gallery in White Lion Street, Tenby in Pembrokeshire. Their telephone number is 01834 843375 if you wish to get in touch, and their site is www.artmatters.org.uk  Enjoy your painting and make sure you give those foregrounds plenty of consideration before you decide on the final composition. Don't be afraid to make them a significant part of the painting, and not just an after-thought.