Highlighting a landscape feature with a glaze

Some of you asked if I would show the full image of the promontory watercolour published on the post on 5th May, so here it is - the scene is in the central Highlands of Scotland, easily seen from the roadside as you approach Rannoch Moor to the north. 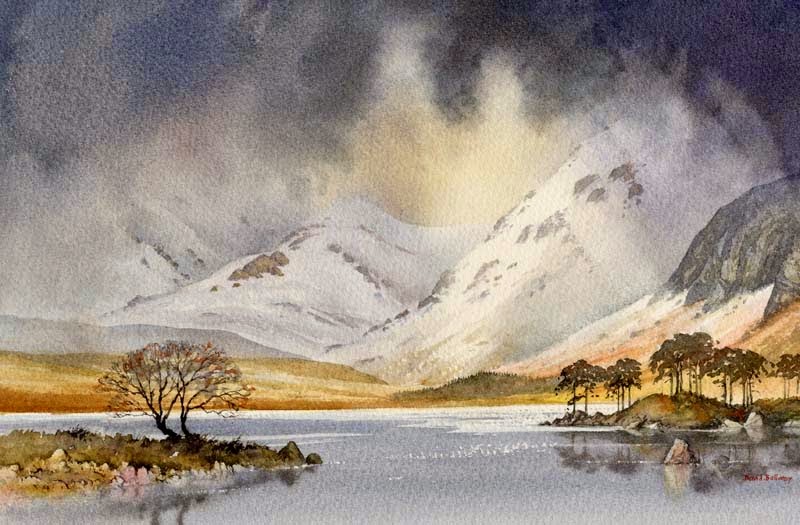 As you can see, I've positioned the lightest part of the composition behind the row of Caledonian pines on the further promontory, to give them more emphasis. The more shadowy parts of the background mountains were achieved by washing a mixture of French ultramarine and cadmium red over those parts which had already been painted. This was done with a large wash brush and quite a weak mixture, creating a thin transparent glaze across those areas I wanted to subdue, and thus emphasising the light section.

The painting is part of the exhibition at the John Muir Trust centre in Pitlochry (Tel.01796 470080) which I should point out ends on the 11th June, not 18th as previously announced. This is due to a mix-up, and I hope no-one will be inconvenienced.

Next week Jenny and I will be at the annual Patchings Art Festival in Calverton, just north of Nottingham, where I'll be demonstrating for St Cuthberts Mill on the mornings of Thursday 5th and Friday 6th June. St Cuthberts Mill make the marvellous Saunders Waterford and Bockingford papers that are such favourites with amateur and professional painters alike. Do come along and say hello.

On the 20th and 21st June Jenny and I will be demonstrating at the Sandpiper Studio on the Wirral in Cheshire. Jenny will be demonstrating pastel painting on the afternoon of Friday 20th and I shall be demonstrating in watercolour on the Saturday morning and giving an illustrated talk on how to rescue watercolours that have gone astray, after lunch. You can find out more about these events from Julie McLean on 07788 412480 or email her at   info@thesandpiperstudio.co.uk
Posted by David Bellamy at 16:22 No comments:

Email ThisBlogThis!Share to TwitterShare to FacebookShare to Pinterest
Labels: Highlighting a landscape feature with a glaze

Jenny and I have just returned from running a course on Exmoor where we had the luxury of sketching and painting inland scenes as well as the coast. The delightful village of Winsford provided us with a great many stunning subjects, while the heavy rain showers kept things lively. For many the local pub was a life-saver! The following days improved and we had a hot, sunny day at Lynmouth, with a harbour crammed with colourful boats and cottages climbing high up the wooded hillsides. 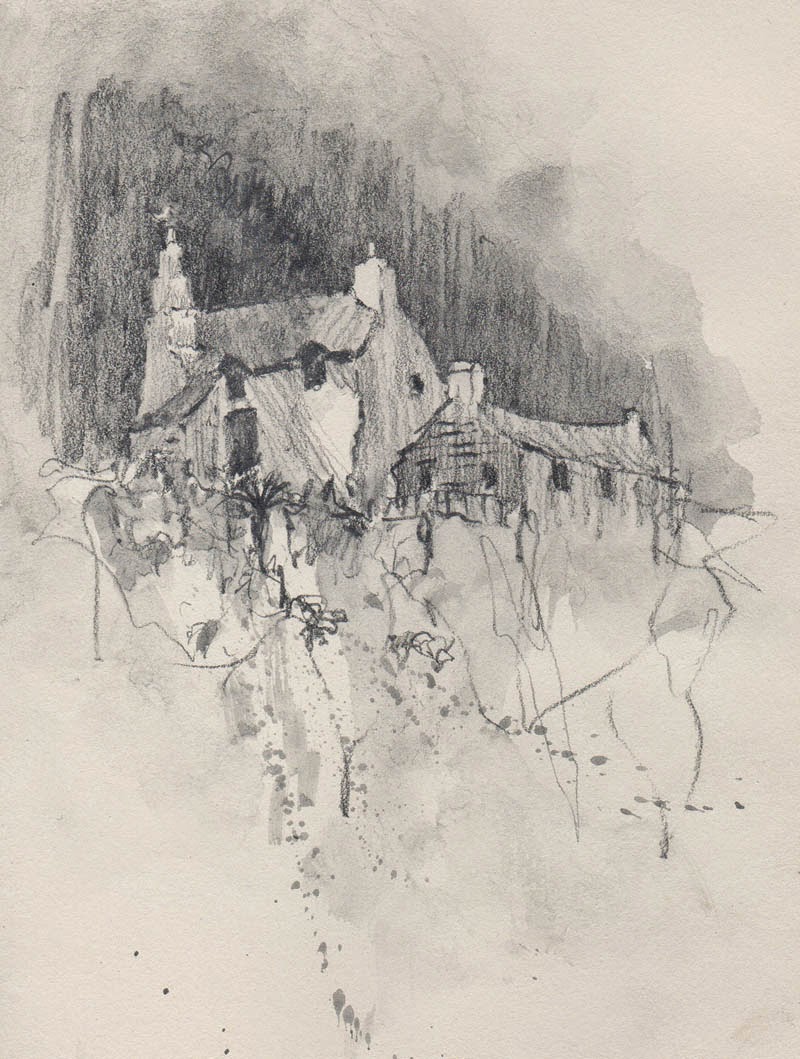 One of several scenes I tackled was a cottage high up above the harbour, using a graphite water-soluble pencil, and washing over it with a brush afterwards. Behind the cottage rose the wooded hillside. This highlighted the cottage really well, and I rendered it as a mass rather than outline each tree individually. You can discern a slightly darker shape rising above and between the chimneys - this was my sole indication of any sense of shape within the mass. As the cottage was perched above  many cottages I decided to vignette the foreground by extending pencil lines downwards, some linked to a hint of vegetation, plus some spatter from the brush after I'd picked up some of the watersoluble graphite on it. This technique is an excellent way to isolate your favourite part of the scene and leave out the bits you don't want. The only worrying aspect to the sketch for me is the absolutely straight line of the roof - in such a wonky building it would be almost de rigueur to provide the finished painting with a supremely wonky roof ridge line.

Our course was organised by Alpha Painting Holidays run by Matthew and Gill Clark, with whom it is a great pleasure to work. They looked after our every need throughout the course, and we thoroughly recommend them. We still have vacancies on my course in Pembrokeshire from 28th September to 3rd October at the splendid Warpool Court Hotel in St Davids, where we have a wide choice of coastal and inland subjects for all tastes. You can get further details from Warpool Court on 01437 720300 or email info@warpoolcourthotel.com  You can also see my website
Posted by David Bellamy at 14:47 1 comment:

Our recent trip to Scotland and subsequent workload have alas, inhibited new blog posts, as so much seems to be happening at once. Jenny and I experienced a glorious period of sunny weather in the Highlands, making for some really marvellous sketching experiences on the Fife coast and in the Cairngorm mountains. Fife has some lovely harbours that make for great painting compositions, and is a place I've missed out in the past because of my headlong rush always to get into the Highlands. It also gave us great pleasure to meet so many of our Scottish friends, a great many of whom turned up for my demonstration at the Pitlochry Festival Theatre. 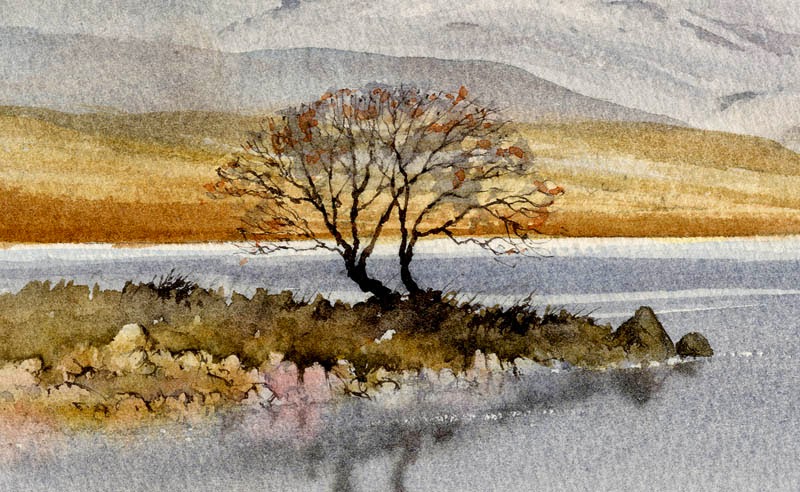 This post's illustration continues the Scottish theme, showing a part of a watercolour of a loch where a promontory is coming in from the left side. So often we see these features as a dark mass set against lighter water. Before you begin work on this consider how you might tackle it in terms of values. In this example I have painted in the promontory so that the top edge stands dark and hard against the light water of the loch, while the bottom edge is light and soft, and in fact lost altogether in places.

This approach avoids the promontory appearing to be cut out and stuck in place, setting it into the composition in a more natural way. Note also how I've dropped in a variety of colours in the lower edge, including permanent alizarin crimson and yellow ochre. Of course, these techniques can be applied to many situations and features in a painting, so give it a try. The illustration is part of a painting that is featured in my exhibition at the John Muir Trust Wild Space Gallery in Station Road, Pitlochry, until 18th June - telephone 01796 470080 or check my website

The one fly-in-the-ointment of our Scottish trip was the vast swathes of wind turbines now springing up all over the place, even encroaching on the stunning scenery of the Highlands themselves. If this continues it will totally destroy the reputation of Scotland for it's outstanding and world-renowned scenery, and what to me is a truly tragic and criminal act simply aimed at vast profits for the energy corporations, and absolutely nothing to do with preserving the environment. I was so badly affected that for the first two nights there I could not sleep.
Posted by David Bellamy at 18:14 No comments: