My recent silence is a result of being up in Snowdonia, at last finding some snow this winter to sketch and roll around in. At times ferocious winds made sketching something of a challenge, but I returned with several good compositions to work on. One subject I spotted while driving along first thing, and luckily there was somewhere to park. The scene that caught my eye was dominated by Esgair Felen - not perhaps an outstanding subject under normal conditions, but under deep snow and with the early morning like catching it, I just had to go for it. 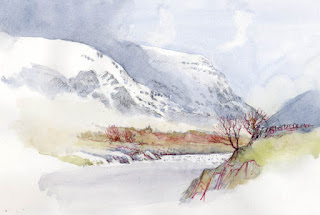 I usually prefer to photograph a superb subject before sketching it, but as I arrived in position the sunlight faded. Still, I took some shots then hurried back to the car. Halfway back along the 150 or so metres the sun came out again, tempting me back. But I wasn't playing that game. Without moving, I focused the camera on the mountain despite the fact that I could only see the top two-thirds or so, and fired away, catching the glorious light on the critical part at the top. Then I realised that I'd caught a new composition - the foreground in the shots was made up of crags and rocks, making the scene look far more remote than in actuality. OK, I didn't have the lake in the scene, but I had a second exciting composition to play with.

The watercolour sketch includes the lake and I finished it off with Derwent Inktense pencils, which are excellent for giving a watercolour sketch a bit more power. Even for my sketches, however rough, I like to paint with the beautiful watercolour sables produced by Rosemary & Co. as they come to such a lovely point and make it a pleasure to sketch in this way.

By playing its little joke on me - albeit the pretty common one of making the subject disappear before my eyes, or losing its appeal - it had actually given me two compositions instead of one, so in future I must watch for this phenomenon more closely, as perhaps I'm missing out on many secondary scenes.......
Posted by David Bellamy at 18:36 No comments: