Spectacular! Stunning! Beautiful! Mere words, even superlatives, fail to describe the amazing scenery of Iceland where I've just been exploring with a group of painters. Even the plague of midges brought on by the hot weather failed to dampen enthusiasm, and we managed a lot of sketching, often of some of the most sublime scenery you can imagine. The waterfalls of Dettifoss and Gulfoss will leave an awesome impression on us for the rest of our lives. 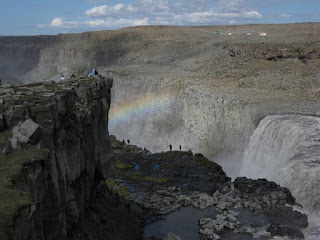 In this view of Dettifoss the figures will give you a sense of the vast scale of the canyon and waterfall. In the afternoon the waterfall appeared, coming from behind the crag and stopping abruptly in mid-air, in fact where the semi-transparent cloud of spray thrown up by the falls ends. In a painting this would look slightly odd, so I would extend it a little further to the right and gradually fade it out rather than stop abruptly. It adds a sense of drama as well as welcome colour. As it is soft-edged and semi-transparent I would lift out the shape of the rainbow from the backdrop and then paint in the rainbow colours onto a damp surface to encourage soft edges, but not having the paper so wet that the colours run into one another. This takes practice, but it's great fun experimenting with the effect. If you really find it difficult in pure watercolour try applying watercolour pencils over the rainbow area once the paper has dried, but avoid laying them on too heavily as you need to suggest an airy effect. Then sweep a large round brush over the coloured pencil-work, applying the stroke in the curve of the rainbow. This will blend them together beautifully. You might like to try adding a rainbow to some of your existing watercolours - initially to paintings that perhaps have not quite worked out too well.
See the excellent Derwent range of watercolour pencils for further information.
Posted by David Bellamy at 18:24