Creating a sense of movement in vehicle paintings

Sketching moving objects can be quite dramatic, especially if it's an enormous tank churning around in mud with bits of earth flying in all directions. Vehicles make for complicated subjects, and tanks are no exception, but when they are moving across rough ground they often throw up a lot of dirt, dust, smoke and all kinds of things that are very handy for losing parts of the vehicle and giving a strong impression of movement. 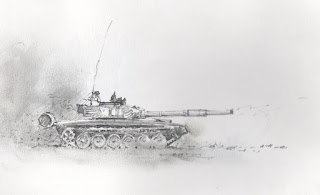 This sketch of a Soviet T-72 tank of the Cold War era was done with a 4B pencil. The cloud of dust behind it and the loss of detail in the lower wheel and track suggest movement. I'd already sketched one come directly towards me as I tried to capture the sense of atmosphere and a fast-turning tank, but in this view I wanted to bring in more detail as it moved broadside on from my viewpoint. The advantage here was that it paused enough for me to render a lot of the detail before it resumed a steady progress to the right.

Simply suggesting some of the wheels helped to give a sense of a moving vehicle and of course it made my task easier. To indicate greater speed I would normally lose more detail at the rear, but here I wanted to include detail I might need later. Spattering more muck around at the rear would also emphasise this effect.

Whilst you may not wish to sketch in the middle of tank manoeuvres these points can help when you are painting a scene with moving tractors in a field, or excavators digging up your local green space, and it makes quite a change from a still life after weeks of lockdown!

I will be doing a free 45-minute demo at 2pm on Tuesday 4th August which you are welcome to join in with your own painting at the same time - details are at  https://www.shopkeeparty.com/artyclasses  and on Tuesday 11th March I will be doing a watercolour masterclass at 3.30pm - again, details can be found at   https://www.shopkeeparty.com/artyclasses
Both will be live online so you'll be able to ask questions.

Email ThisBlogThis!Share to TwitterShare to FacebookShare to Pinterest
Labels: creating a sense of movement in a painting., Sketching moving tanks and vehicles