Manning the barricades.....with a 3B pencil 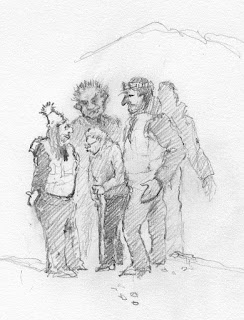 Here in Mid-Wales it's been a really gloomy start to the new year, and that's not just the weather - confrontations at Llandegley between many protesters and the wind-turbine developers escalated when they began delivering concrete. It really shows the amazing commitment to saving the planet by these truck-drivers in having to rise about 1am to drive down from Yorkshire, about 150 miles, to shatter the sleep of the locals before 5am. Somewhat unfairly, the developers do not seem to have told them that these turbines will not be connected to anything, as there is no connection to the grid! Apparently so long as they look OK this doesn't matter, and they will still get their millions so long as one of the seven turbines is standing up by 31st January. They have brought a large generator along, probably just to make sure the little thingie at the top goes round and round anyway.

Many security staff had been drafted in, but the protesters held their ground. The trucks stood still. At first the police present were unsure about the legal situation, as this was on common land where we had every right to wander around, sketch, watch birds, have a picnic, etc, but in the end the issue was resolved by protesters walking slowly in front of the trucks at less that funereal pace. The security staff tried to bully some out of the way. One elderly lady slipped on the muddy surface, just as the truck behind saw a gap and raced forward. Fortunately she managed to roll out of the way, but inches from the wheels that would have crushed her. The truck did not stop. Many dear little ladies that day and subsequently found themselves intimidated as in the sketch, by these aliens.

It would take a book to write up all this. If this were happening in Surrey or Sussex where they don't appear to have a single turbine, there would be a national outcry. We already have hundreds and the scandalous manner in which these speculators accrue vast wealth for trashing the livelihoods, well-being and local tourist economy is shocking. But we carry on the fight, though there's not much time for painting.

I wish you all a rather belated happy new year, and every success with your painting!